All Assembly members declare: “Wales will go it alone” 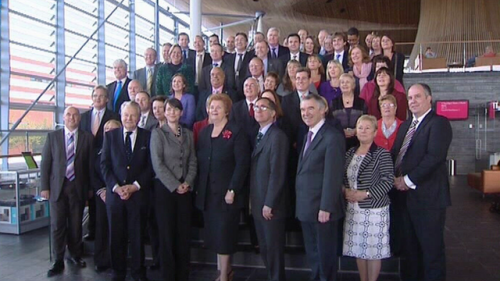 This morning, all Assembly members formed an unanimous united front to declare that Wales will go it alone.

At 9am this morning every single Assembly member stood on the steps of the Senedd and smiled in quiet relief as Prime Minister Carwyn Jones read out a statement.

A tear of exultant exhaustion could be seen in the corner of Mr Jones’ eye as he read: “We’ve all had it up to here with these creepy British state bureaucrats trying to tell us what to do, enough is enough. Today we are issuing an Unilateral Declaration of Independence”

Mr Jones went on: “It is now obvious to all that Wales’ position as a metaphorical  deck chair on the sinking ship of the corrupt British state is untenable. We have all simply had it with being  told what we can or can’t do by corrupt war mongering maniacs in London and Brussels. Deep in our hearts we have known for some time that Wales’ continuous forced dependance on the British state is a farce that cannot continue. We are a country rich in abundant resources and talented people. We can and we will do much much better than this”

“We refuse to keep idly discussing trivial subjects for months on end whilst Westminster enforces on Wales serious life threatening poverty and austerity for an indefinite number of years. This is nonsense. We control our own destiny. We decide. We have been elected to serve you the people of Wales whoever and whatever you are and by God that is what we will do. We are your servants and you the people deserve better. We will make a better and prosperous country for you, we will be ambitious and we will be dutiful. Welcome to a better world”

After drinking some champagne in the morning sun, Mr Jones shook hands with some of the 5000 people who had come down to the Senedd to mark the amazing occasion. He then briskly walked back towards the Senedd, momentarily turning round to address the crowd “Let’s get to work” he said with steely determination in his eyes. The crowd cheered in joyous delight.

A few minutes later, a press communication was sent out stating that Senedd staff will also do their best to try and curb the monotonous speeches of Jane Hutt.

If Welsh politicians did UDI’s they would probably be the best in the world. Dydd Ffŵl Ebrill hapus. Happy April fool’s day. Dare to believe. Ffydd